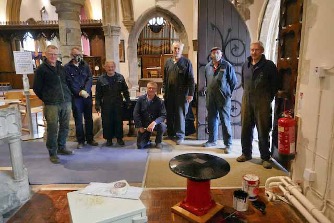 Work continues on 5668’s driver’s side tank which, as usual, means someone has to wedge themselves inside it to mark the positions for yet more holes to be drilled.

After that, the panel concerned gets taken down and a set of calipers used to mark the position of those holes that couldn’t be marked from inside the tank.

Once the new holes have been drilled everything goes back together again and is bolted up.  The top panels had holes drilled to take the doubling plates that will support the lifting eyes which was the final job for those.

The rear back panel was offered up, marked for cutting the vertical rear edge, taken down, cut and offered up again and clamped fully into position to assess fit.  Once happy, the holes that need drilling along the top edge were marked through the angle and the plate marked for cutting a small amount off the height to align with the angle.  It was then taken down again, cut and the edges smoothed off ready to be drilled and trial fitted next week.  Sadly, our electric hoist has expired so all that trial fitting took a bit more manual effort than last week.

Meanwhile, the rods have been moved into the shed ready for the machining of the brasses for the bushes which should also start next week.

The water jet cutting of the second missing rod has begun with this shot showing the outline taking shape.

Lots of work on 5668’s driver’s side tank this week once we finally had the top and rear panels delivered on Saturday after they were promised for Wednesday and then for Friday.  Whilst waiting, the top beading was dressed back after it had been welded together last week and then all the small ¼” rivet holes to attach it were drilled.

before adopting various contorted positions to mark them by drilling through the existing holes in the angle pieces using a hand drill.

They were then taken down again and some 400 holes drilled using the mag-drills.

Once finished and all the holes de-burred, the front top panel was put up and bolted down in enough places to get it sitting flat.  The back of the tank comprises three panels (front, rear and a small central joiner section) having two folds to produce an offset.  The front one was lifted into position

and clamped into place so that it could be marked at the front and top edges to enable it to be trimmed to fit.  It was then taken down again and the plasma cutter used to cut off the surplus.

It was then lifted back into position and clamped into place to check the fit.

The first job next week will be to find someone small enough to fit inside the tank to mark the position for the holes to be drilled in the top of the rear section for attachment to the angle.  After that it can come off again and another long session with the mag drill begins.

As ever, work continues on 5668’s tanks with this week’s efforts concentrated mainly on positioning  the top angles and drilling the mounting holes

and fitting the top capping strip which was complicated by having to weld the various sections together again after the original tanks were cut up some years ago.  The new doubling plates that will support the lifting eyes were shaped, welded up and trial fitted and more reaming  of holes was undertaken.

The rear top panel and capping strip were also positioned, drilled and bolted up.

Work on 4253 involved finishing off the pipework for the ashpan watering system,

trial fitting it all and connecting up a hose to test its operation and direction of the water jets before finally welding it all into place.  The boiler up at HBSS has now had all the backhead welding completed and the fitting of the side wrappers has commenced.

Finally, the buffer that we refurbished to help St Mildred’s Church, Tenterden with their fundraising activities was delivered to the church on Friday and manhandled into position.