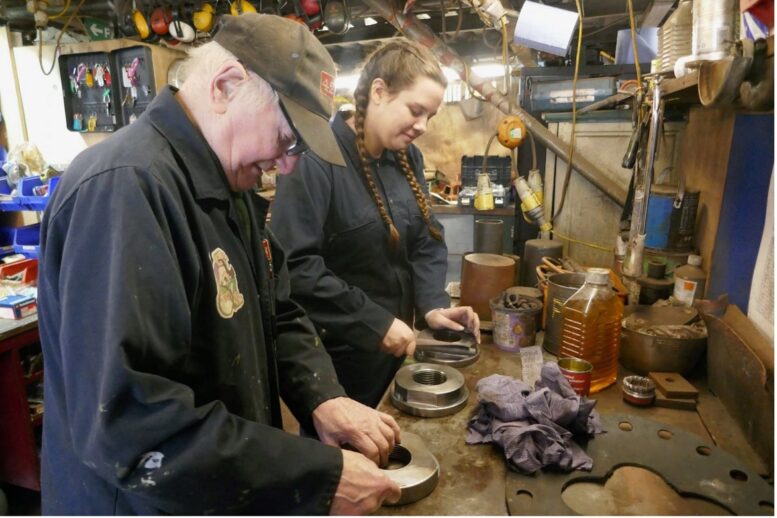 and we also painted most of the cladding sheets for loco 65 to help the overhaul on its way.  Friday saw completion of the machining of the new intermediate rod which was delivered to Rolvenden on Saturday whereupon, for the first time, a full set of side rods was laid out in the shed.

This is a shot of the new rod complete with a new oil pot lid.

The second con rod will now be  machined at Automation Technologies as their work schedule allows.  Sunday saw the start of the long job of measuring everything up on the rods to enable the final machining of the bearings so that everything fits together.

Also, the rear tank panels were offered up one at a time so the fit could be checked and edges trimmed as necessary.

Once that was right, the outline of the splasher plate was scribed on the plate which was then taken down and the plasma cutter used to cut round the scribed line.  Once offered up again, the edges were trimmed to get a good fit

after which a couple of holes were drilled so the plate could be bolted hard up to the angle pieces.  Then all the rivet holes were marked through the angle onto the plate with a hand drill and the plate removed again so all the holes can be drilled through next week using the mag drill.

At HBSS the first of the side longitudinal stays has been fitted.

This week, the new crankpin nuts had the surfaces smoothed with emery paper following machining,

and the oil pot tops were cut off a couple of scrap rods lying in the field and then cleaned up.

This will be fitted to the new intermediate coupling rod which will save us having to make new ones.

Sunday’s workforce was noticeably depleted due to many people currently having someone in the family suffering with Covid but we managed to make the special shaped flogging spanner for the crankpin nuts out of ¾” plate.  After measuring and marking out, it was cut to rough shape with the plasma cutter

and the curved line that will fit over the circumference of the nut was chain drilled while the sides that will grip the flats of the nut were again cut with the plasma cutter.  After that, work on final shaping with grinder and file was started.

and, now the boiler has been turned, the remaining rivets attaching the new front barrel section have been able to be put in.

The first task this week was to go down to Wittersham Road to replace the tarpaulin covering 5668 that had come adrift in the recent winds.

During the week, we received the final drawings of the motion we’ve been missing and, from the foundry, the big and small end bushes for the connecting rods plus the water gauge indicator plate for 5668.

The machining of the crankpin nuts continued with just two remaining to have the flats cut into them.

before a replacement plate (made from the surplus cut off the new side wrappers) was shaped and positioned ready for welding.

This has meant we needed to made a new pad for the whistle bracket and drill and tap it for the retaining studs which is now done and ready to be welded on when the boiler returns.

4253’s new ashpan and the refurbished damper rods were also treated to some paint.  We are also waiting on the castings for the rod big and little end bearings and, additionally, the two rods we’ve had to have made.  For the latter, a visit this week shows work well progressed as the following shot shows and, hopefully, we’ll get the coupling rod back next week.

In preparation, we have started to lay out the other coupling rods so we can start the measuring process.

Work has continued on the water gauge for 5668 including the machining of an operating rod seal as well as the bending up of the spring that keeps the indicator in place as it moves up and down in the gauge.

and a start made on tapping threads into the large holes in the backhead into which the new longitudinal stays will be screwed.