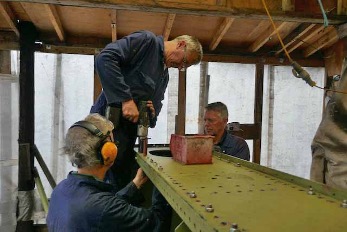 On Tuesday, the slide bars were cleaned and re-oiled to ensure the crossheads move freely in preparation for fitting the piston rods to them.  The remainder of the cylinder cover pressure relief valves were tested, set and fitted to the covers

which then had their mating surfaces cleaned up ready for re-fitting.

Finally, the superheater header and regulator box were moved inside to be worked on.  Friday saw the front steps refitted (they were removed to give more room for fitting the pistons)

and the regulator box was stripped down and some of the corroded bolts removed.  On Sunday we cut various blanking plates for the superheater header’s hydraulic test and fitted the new studs.

The regulator box had the interior cleaned up, the remaining old, seized in bolts were heated and driven out and then it was given a coat of paint.

Additionally, the drain pipe on 5668’s tank was fully welded into place

and the chills for white metaling the side rod bushes were finished and painted.

Tuesday was spent sorting out the sales trailer and container which, to be honest, have become a wee bit untidy over time – at least we’ll be able to find things now.  The superheater header was also removed from storage in preparation for a hydraulic test.  On Friday, the pistons were moved into the main shed ready to be fitted and the cylinder bores were cleaned and oiled.  The cylinder pressure relief valves were assembled onto the specially machined test rig

before being hydraulically tested and set.

Sunday was piston fitting day and started with drilling and tapping holes in set positions in the ring grooves to hold bronze pins to prevent the rings rotating in service and catching in the ports.

The pins were screwed in, cut off, then ground and filed flat with the surface

with this shot showing the finished job.

The piston rings were placed in the bores to measure the end gaps which were filed wider to suit before being oiled and fitted to the pistons.  They were then moved to the loco and placed in position to be lifted and fed into the cylinders.

The supreme sacrifice of forgoing afternoon tea break was made so that both pistons were fitted to their bores by close of play.

A very different week as, for the first time in 18 months, we were out with our sales stand at a local event.  This was the Weald of Kent Steam Rally which was, as ever, a really good weekend with plenty of visitors and no rain.  Friday was set-up day and took far longer than usual mainly due to the length of time since we last did it.  The following shots show the setting out of the sales table and the finished stand plus the displays and photographic record of the restoration on show in the adjoining tent.

We were kept busy throughout the two days and managed to raise a good sum towards the ongoing costs of completing 4253 which was most welcome.

As far as getting any work done we only had Tuesday which involved continuing with 5668’s water tank and cleaning up some of the parts to be bolted to it.

This week didn’t go as planned as The Weald of Kent Steam Rally, scheduled for this weekend, has been postponed to next weekend due to the site being waterlogged.  Accordingly, Friday and Sunday reverted to normal working party days so we got more done than anticipated but at the cost of not raising any money.  The annealing, cleaning and oiling of the boiler tubes has been completed and they’re all palleted up ready for transporting to HBSS in Liverpool.

4253’s rear buffer beam had it’s final top coat and is now ready for signwriting, the front top plate of 5668’s tank was coated in mastic and lowered into position

before being bolted down ready for riveting.

Also, a new batch of beer arrived and was labelled, and the boxes assembled in readiness for the stream rally.

And, meanwhile at HBSS, the boiler’s foundation ring is being readied for fitting.

Week One (Final days of July)

Tuesday and Friday of this week mainly involved annealing the last of 4253’s boiler tubes,

cleaning the ends, oiling them and then stacking them on the purpose built pallet.

Other jobs included removing all the drop grate parts from storage and giving them a clean-up and measure to ascertain the required size for the remaining fire bars as well as repainting the rear buffer beam in preparation for the number to be sign written.

For Sunday, it was back to riveting and, this time, it was the top, curved, narrow panel at the rear of the tank which is one of the most difficult parts due to the lack of room to both get the rivets in and to then hold them up.  Accordingly, it took most of the day to get some 50 rivets knocked in what with having to make or modify holding up tooling as we went.  This shot shows the easier ones: they got progressively more difficult as we worked towards the back of the tank.

After that, the rearmost top panel was bolted into place

and the first section that included the doubling plate for a lifting eye was riveted down.

Next weekend we’ll be manning our sales and information stand at the Weald of Kent Steam Rally which everyone is looking forward as, not only is it a cracking event, it’s the first one we’ve been able to attend for 18 months thanks to Covid.