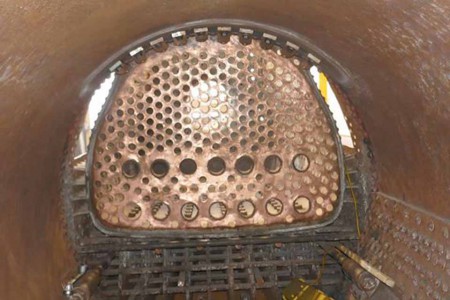 Christmas week but we still kept soldiering on.   Monday and Tuesday were the last two days of the Santa Specials so the sales team were kept fully occupied raising funds for the project.  A sincere thank you is in order to all those shareholders who turned out to help man the stand over the whole ten days.  Everyone took Christmas and Boxing days off (no committment!) but Friday saw people turning out to break down the stand and transport everything back into storage.

Pending the riveting of the palm stays next weekend,

work on Sunday was concentrated on various bits from 5668 that needed to be stripped down, cleaned and assessed.  This involved much time spent in freeing off components that haven’t moved for some fifty years,

and the drilling out of many siezed taper pins.  A trip was made down to where 5668 is stored to assess what else can be removed and, having had a good look at the condition it’s in, bought on a feeling of “here we go again”.  Another pile of rust to restore.

Finally, a big thank you to everyone who has worked on 4253 or helped raise funds for it, over the year to bring nearer the time when it will run on the K&ESR.  We have some interesting plans to announce in the new year so keep following us to fine out what they are.  In the interim – Happy New Year.

This week involved more fettling of the palm stays to ensure they all sat happily against the inside of the boiler barrel without fouling any of the throat plate rivets.

Given the space constrictions in the boiler, only a couple of people were needed for this task so others started retrieving various bits of loco 5668 from storage to be dismantled, cleaned up and inspected including the gear operating the sanders, the reverser and quadrant and the handbrake column.  The last item is shown here being taken apart.

The caulking of the last bit of the firebox lap seams and also the new barrel section was finished off.

New copper stays were fitted between the front of the firebox and the palm stays and the latter were then bolted to the boiler barrel after all the fixing holes had been reamed through.  We are now ready to rivet1 them into place after Christmas.  This shot shows the ten palm stays in position along the top.

Once again the sales team were in action at Tenterden over both Saturday and Sunday at the Santa Specials raising funds for the project and will also be in attendance for the final two days, Monday and Christmas Eve.

This week the boiler mud hole doors and the covers for them that attach to the cladding were taken out of storage and cleaned up.

The prep work for fitting the palm stays has accupied a lot of time due to their needing to clear a number of the countersunk rivet heads on the inside of the boiler barrel.  This has required careful and minimal grinding back of some of the rivet heads

and some fettling of the palm stays themselves.

The stays are being number stamped as we go to ensure they end up in the right position.

The measuring of the rod bushes has now been completed and recorded so machining them is the next job.

Sunday was not a productive day.  We went up to Carriage & Wagon at Tenterden to put four rivets into a bogie out of the DMMU.  A quick job and then back to Rolvenden to get on – not so.  By lunch time we had managed two rivets because the rivet guns kept jamming needing constant attention.

The cause appeared to be the amount of water in the air line system which persisted even after we’d drained the compressor reservoir and blown down the lines.  We eventually gave up and the afternoon was spent with half the team getting on with the palm stays while others stripped, cleaned and reassembled the rivet guns.

In addition, the sales team were not only in action all Saturday and Sunday at the Santa Specials but also did a session on Friday evening providing mulled wine and hot chestnuts for the Norwegian Trust members train.

The new steam heat shut-off valves had gaskets made and were then fitted to the loco followed by cleaning up and painting of the connecting ends for the steam hoses.

The crank pins on the wheels and the bush housings on the rods were all measured in preparation for machining the bushes.

On sunday, we riveted the throatplate to the boiler barrel leaving the fitting of the palm stays as the next job.

Once again, the sales team were manning our stand at Tenterden for the whole weekend.