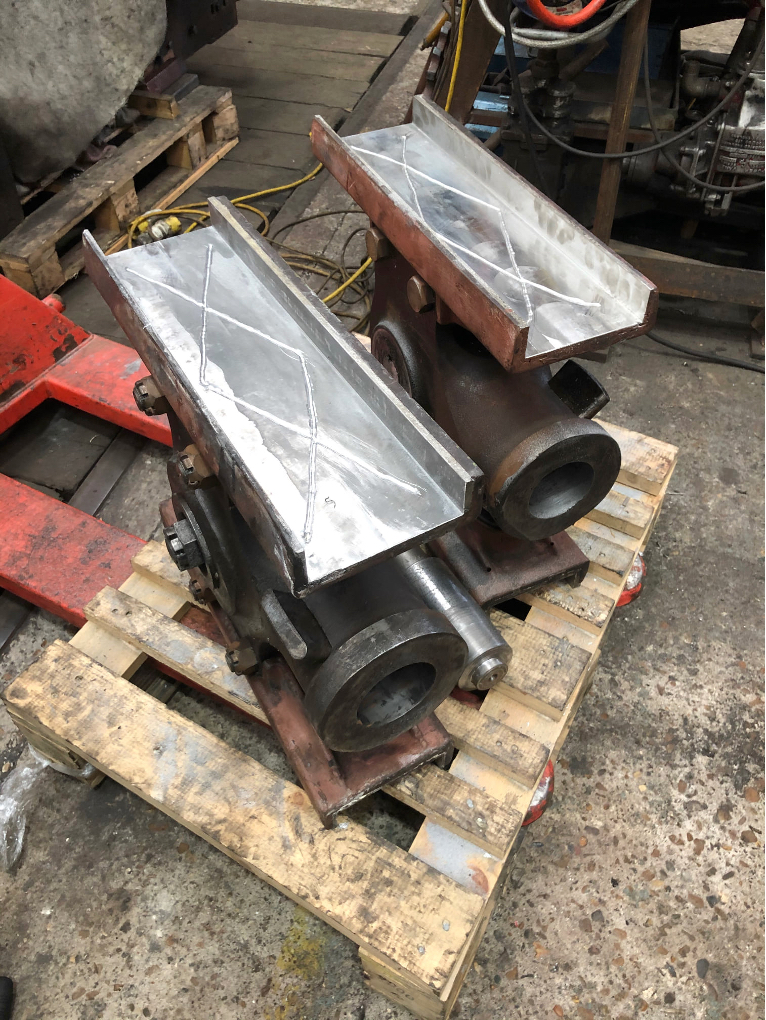 A shortened week due to the Tier 4 restrictions arriving on Saturday.  Progress continued with 5668’s tanks having the top angle removed so the corners of the overlapping side plates could be ground back.

The front sections were delivered during the week and, with much difficulty and numerous quotes from The Book of Colourful Words, were eventually moved into the Bunco Booth where they were cleaned and given a coat of red oxide.

More internal angle brackets for the tanks were cut, marked and drilled.

On 4253, the top and bottom sections of the crossheads were painted,

and the internal motion was given a thorough check over, clean and re-oiling after the long time the loco was out in the yard.

The oil-pot lubrication was also checked over, various cab fittings cleaned and oiled and the reversing gear given a full check.

Finally, to all our supporters, volunteers and those who follow our progress, we wish you a Merry, if restricted, Christmas and the hope of a better New Year.

Tuesday’s working party didn’t get as much done as hoped due to a 4 hour power cut caused by necessary repairs to the supply up the road.  However, before we got switched off, some more drilling was undertaken on 5668’s tank backs

and we completed the overhaul of the Railway’s small hydraulic hoist trolley.  On Friday the pistons were given a good clean before being oiled in readiness for fitting soon.

The glands and packing for the piston rods were also given a check over and a couple of storage lockers that we’d obtained were rebuilt and painted ready for service.

Sunday it was back to 5668’s tanks with various bits of baffle plate and retaining angle being cut, marked, drilled, welded and trial fitted as per the following shots.

In addition to that, a leaky oil box in 4253’s  cab was removed, repaired and replaced and the vacuum pump operating bracket was attached to the driver’s side crosshead.  This involved a couple of setting up bushes being machined to get the alignment right before the new socket can be welded intro place.

and grinding one off the back sheets to fit around the splasher.

Following the completion of the machining of the running surfaces of the crossheads, all the removed white metal was melted down and recast into ingots for future use.

The crossheads themselves were returned during the week

so, on Sunday they were trial fitted to the slide bars, removed again to scrape back the high spots on the white metal bearing surfaces and then refitted for another try.

This process continued again and again until they were both judged to be right.  Not a quick job considering how heavy they are requiring a lot of effort to get them into position and then out again.

Meanwhile, the valve bore cleaning out and re-oiling has been completed and the covers loosely replaced pending fitting of the valves.

Finally, a big thank you is due to all those who have thus far sponsored some stays for the Stay With Us Appeal and of course to all the others who are just about to!  Don’t be shy; fill in that application form sitting on the mantlepiece or click on the link here Stay With Us Sponsorship Appeal .