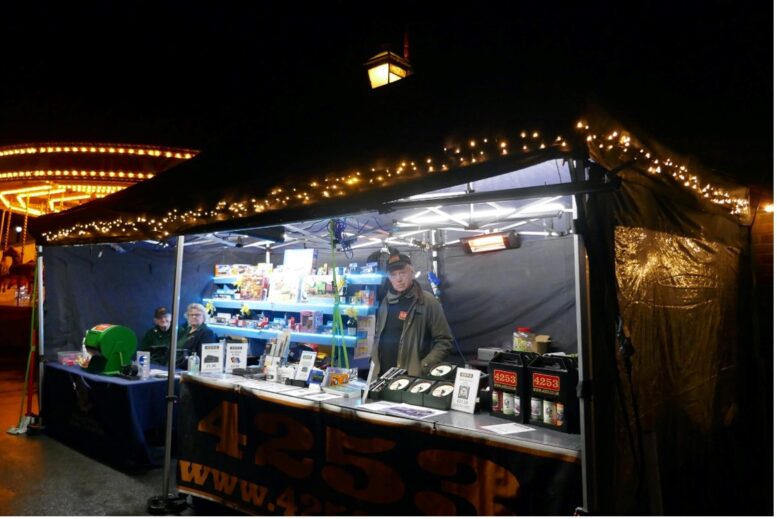 Due to the number of clocks we sold last weekend, most of the team were pressed into producing new ones on Tuesday.  The flue tube sections were cleaned of scale, the legs cut from round bar, welded on, cleaned up again and then given their first coat of paint.

On Friday, the clock bodies were given a final coat of paint and are now ready for assembly. the filler lids for 5668’s tanks were progressed with the holding brackets being fabricated,

and we also received the patterns for casting a new blast pipe for 4253.

Saturday and Sunday saw us back at Tenterden manning our Sales & Tombola stand for the Santa Specials but, once again, we had a small team at Rolvenden on Sunday who got on with the job of riveting up 5668’s tank.  This week it was the top panel for the cab section which is the most difficult given the very limited access available to hold up the rivets.

Work this week has mainly centred around fundraising as the Santa Specials which involved manning the sales stand on Friday, Saturday and Sunday, with this shot showing the stand late on Sunday in between trains.

In addition to those days, on Tuesday many of the team helped to move the entire stand to another position on Tenterden station as the original involved a steady flow of water over the floor and the constant formation of a large puddle directly outside whenever it rained.  Despite all this activity, we still had people working at Rolvenden on 5668’s tank with more bits being bolted together including the rear cab section which is very narrow thereby making access difficult for both bolting and riveting.  This shot shows the underside of the rear top, curved panel

while this one shows the top side and again emphasises the lack of space at the back of the tank.

Some additional riveting was also achieved on the Sunday with the drain flange attached to the top panel.

On Tuesday the team were at Tenterden Station putting up the gazebos, running power lines and setting up the display tables etc in preparation for the start of the Santa Specials at the weekend.  Friday it was back to working on 5668’s water tank.  The rear cab section was lifted into position and bolted down for the final time

and the top panel was removed to gain access to rivet the outer top angle to the side plates.

Saturday morning was an early start setting out all the Tombola prizes and the sales stock in the main gazebo ready for the passengers on the first Santa Special train of the day.  Additionally, we were manning the smaller gazebo for the Railway serving the complimentary mulled wine and port so that needed setting up as well.  Luckily the rain stopped at about the same time the first passengers started to arrive and the rest of the day was dry and fairly sunny if cold.  Sunday was another busy day at the Santas with these shots showing the two stands at a quiet interlude between trains.  The day was busier but also wetter and colder!

However, we had sufficient bodies to still have a small team at Rolvenden who managed to undertake more of the riveting on the tank including providing some training for the Railway’s apprentice.

All in all, a good week’s with more progress on 5668’s tank and some much needed funds raised for the project.