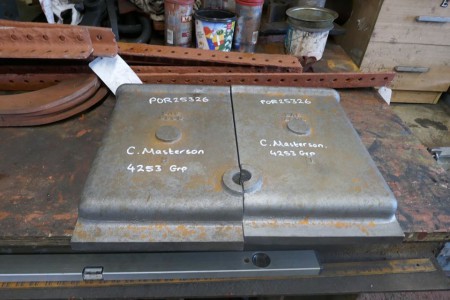 The boiler fund appeal has started well so don’t get left behind – go to the ‘How You Can Help’ page to buy a share.

and the dressing back of areas where the cut up angle sections had been welded together again last week.

Additionally, the new fire hole doors were drilled and tapped to take the studs that will hold the operating mechanism

On Wednesday we attended the funeral of our good friend Dave Dee where the turnout of some 200 underlined just how popular he was and how much he will be missed.  The memorial bench for him is now nearing completion with the slats receiving a second coat of gloss.

and removing any parts that can be reused or, as a minimum, serve as templates.

The first of the fire hole door studs was machined and threaded with the second started and the new steam manifold pad casting was picked up from the foundry as this will need some machining prior to going up to HBSS to be fitted to the new backhead.  On Sunday the new pieces of angle for the bottom of 5668’s tanks (the originals have vanished) had the sides that will affix to the frames measured, marked out, centre punched and then drilled through.

On top of all that, the sales team attended the Tenterden Model Railway Exhibition on both Saturday and Sunday.

Our end wall has finally been rebuilt just in time to keep the worst of storm Dennis from washing us out.  Lots of bits received this week.  The long-awaited pistons and rods were collected

together with the crossheads, complete with new cotter and gudgeon pins.

In addition, we now have a set of Firehole doors as well.

Work on 5668’s tanks continues and, with most of the top sections now dismantled, we started to weld the sections of angle back together again.  This was a bit of a jigsaw puzzle but with the help of a set of drawings and plenty of measuring it was soon ascertained which bits went where.

Work on the boiler has started at HBSS with the backhead having already been removed.

This week we’ve continued the rebuilding/improvement to the end wall of our boiler house so that it can, when necessary, be removed as one piece.

Which are then cleaned up, given a coat of red oxide and labelled.  Sadly, all the grinding has taken a toll on our angle grinders and some replacements are now necessary.

Two of the team went down to Blaenavon during the week to retrieve some more tank parts that have been unearthed there and bought them back on pallets.

Again, the platework is scrap but the angle pieces and various other parts attached to them will be fit for further service.  The steam heat valves and hoses have been fitted

And, next week, we have people travelling to various parts of the country to pick up parts so that we can get on with 4253’s motion rebuild. The Final Push Appeal for the boiler is going well.  Don’t miss out – go to the ‘How You Can Help’ tab above for more info.

Work has continued on building an improved, removable end wall for the boiler house.

As always happens, the sudden new-found space left as a result of the boiler going was very quickly filled with the cut-up top sections of 5668’s tanks.  With these all being inside, work on them is no longer weather dependant.   This is laborious work with the old rivets being ground back and then hammered out as these shots (taken before everything was moved inside) show.

Although the plate work itself is long beyond use, the frame angles and various brackets are salvageable and give us patterns for the rebuilding work to come.  One it had all been moved under cover work continued at a pace.

Work on the Dave Dee memorial bench is also coming along with the steel side frames stripped back and undercoated.

The wood slats have been stripped of all the old paint, repaired where necessary and given the first coat of primer.  It will soon be back in place on the platform with a suitable plaque.

Under testing, one of the new steam heat elbows from the manifold has been found to be porous but, fortunately, we have a spare casting so that work can continue.