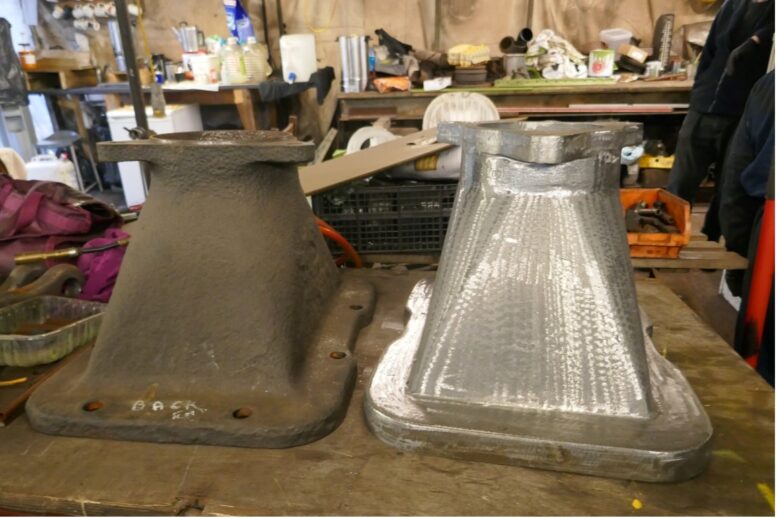 This week, the repairs on the rear ducket for 5668’s bunker were completed and it received its first undercoat.

The support brackets were too corroded to reuse so new ones were shaped and drilled.  The new casting for the water gauge arrived but, sadly, it had a couple of cracks and wasn’t actually the right one anyway!  4253’s new blast pipe was fettled to fit comfortably over the retaining studs

after which a gasket was made,

it was bolted down and the excess stud length cut away.

Other work included white metalling another couple of the rod bearings, re-tapping the threads for mounting the boiler expansion brackets to the frames,

cutting and bending a new support bracket for the ashpan damper bell cranks.

and the machining of the bushes for the vacuum pump’s operating bracket was started.

This week, the new blower ring casting was palleted up and sent off for machining, the repaired top ducket for 5668’s bunker was cleaned and painted

and then had the rear lamp bracket holes drilled.

Friday was a dead loss as the electricity supply failed in the morning so the team strengthened the roof (which was starting to lift in the wind) and then went home again.  A correct decision as it turned out with power not being restored until Saturday.  On Sunday, the snagging of the underside continued and is now almost complete

while the new section of fixing strip for the ducket had its rivet holes marked out and then drilled.

Some of the rod bearings were also white metalled which took most of the day with heating and then tinning the brass bearings, clamping them onto the chills, fire cementing them in place, heating them again before finally pouring the white metal.

Once cooled, the chill is then dismantled and the centre section removed using the hydraulic press.  Repeat for each bearing.

and they have now been finished and painted.  The repairs to the top rear section were also completed.  The new combined blower and brake ejector ring was taken out of storage and a set of drawings obtained showing how this needs to be machined.

Mid-week, 4253 was shunted out of the shed into the sunshine to check all the snagging work that’s been carried on underneath and also so it could be photographed for our Fill the Gap Appeal.

On Sunday, a repair section for the top beading on 5668’s bunker ducket was heated and shaped round a former and then finished off in the hydraulic press.

after which it was transferred to the radial drill, clamped down and the three holes for the jumper retaining brackets drilled in the ‘ears’.  It was then turned up-side down, re-clamped and the fixing holes drilled in the base using the template made last week.  Following that, it was trial fitted to the cylinder block.

At HBSS, the re-staying of the boiler is progressing with more copper stays threaded in and ready for knocking over.

There are still plenty of stays to be fitted including the long crown stays so there’s still time for you to sponsor some so hurry to the ‘Stay With Us’ page, and see how you can help get the boiler finished.

This week, the bottom inner angles for 5668’s bunker that were bent last week had fill-in plates made for the corners which were then welded in and dressed back.

After that, they were lined up with the original outer angles and, with a steel plate inserted on which to mount the mag drill, the rivet holes were drilled through.

Other bunker angle sections were repaired where possible or, if too far gone, replacements were made such as the shelf bracket seen below being bent to shape.

The top section of the bunker back had the repairs finished and the trim reshaped and welded back on.

The new blast pipe casting was collected and the new and old are shown below.

It’s certainly a bit thicker than the old and took three of us to lift it onto the shaper to start the machining.

after which it was transferred to the borer for the top face to be machined as that has a lip on the inner edge for the jumper.

Meanwhile, the boiler work continues at HBSS where the throatplate rivets have all been tooled, the foundation ring fully bolted up ready for riveting and more stays fitted.

Finally, please take a moment to read our Newsletter No16 Winter 2022 regarding the funding shortfall we are currently facing due to Covid having severely restricted our ability to get out and about fundraising. Anything you can do to help us keep the return of the boiler on schedule will be gratefully received.