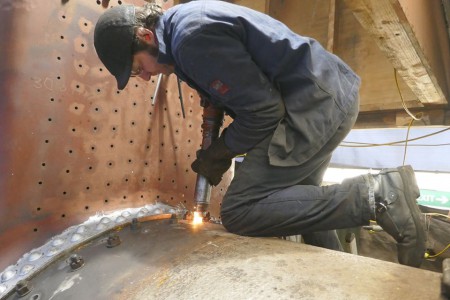 On Monday the boiler was lifted out, loaded onto a lorry and headed off to HBSS in Liverpool.

This left us to rebuild the end wall of the boiler house and effect some repairs where the weather has taken its toll over the years.  The manifold pad removed last week was cleaned up in preparation for having a new one cast given 50 odd years of weather has certainly taken its toll here as well.

Other work has included more stripping of 5668’s tank parts,

more repairs to Marcia’s smokebox and the assembly of the new steam heat pipes and couplings.

Finally, it was decided we’d restore the bench on Rolvenden station that Dave Dee used to sit on so it was promptly dismantled

and work is already well progressed.

No activity on Tuesday as this was the day of our annual Christmas Lunch when all the volunteers who work on 4253 (41 in total this time) get together at Tenterden Station Buffet for an excellent meal supplied this year by Michelle and helpers.  On Friday work was concentrated on preparing for the boiler lift next week which included taking out the end wall of the boiler house so there is clear access for the crane.

On Sunday the final bit of boiler work was done with the last of the retaining rivets blown out of the manifold pad so this could be removed from the backhead to enable a pattern to be made as it is too corroded to re-use.  Also, more parts of 5668 were pulled out of storage to be freed up and dismantled including sections from the tops of the water tanks which, sadly, had been cut up some time in the past.

They’ve been sitting in the open for so long that this bit is starting to look like the surrounding grass.

Each bit is being photographed before it’s taken apart and useable parts are being marked up so that, once removed, we’ll know what it is and where it came from.

Work also continued on the repair of Marcia’s firebox which has been having the lip the door closes on built up with weld where corrosion has eaten it away.

We have been investigating the advantages of sending our boiler away to finish its overhaul on the basis this will shorten the restoration by some 18/20 months and have decided on Heritage Boiler Steam Services to do the work for us.

On Tuesday, some of the team travelled up to visit the company to see the premises and discuss procedures, materials and timescales etc.  This is a view of part of their workshop.

On Friday, preparation work began for moving the boiler with the roof of the boiler house being lifted off

which, once the end wall is also taken out, gives ample room to lift the boiler.

On Sunday we started to accumulate all the bits that will have to go, with this showing the ten new longitudinal stays on the ground next to the boi1ler and the new front tube plate being secured to a wall upright.

The sections of the new backhead were also assembled and placed next to the boiler house so that they can be easily lifted onto the transport.

In between this activity we held our 8th AGM on Saturday where Operation Final Push to accelerate the restoration was unveiled with the engineering and finance directors explaining the costings, timescales and advantages and, following a vote, this received unanimous approval from the shareholders present.  As one element of the funding requirement we need to sell at least 100 new shares over this year so, if you have enjoyed following this project week on week, then this is your chance to become a part of it.  If you are already a shareholder then you have the opportunity to become an even bigger part of it!

Shares cost £250 each and you can pay in one instalment or by monthly standing order.  Please see this link www.4253.co.uk/Become_A_Shareholder/ If choosing to pay by monthly standing order, we would prefer if this could be over a maximum of ten months i.e £25 pm, given the short timescales involved. However if you wish to purchase at a lower monthly cost of between £10 and £25, we shall still be more than grateful to receive your application. Thank you for following our post each week – we now need your help to get the job done. Thank you in anticipation.

During the week most of the work went into cleaning, freeing up and sorting out various bits from 5668 which were taken out of storage and delivered by Land Rover.

Given that none of these bits have moved for some 50 years everything took quite a bit of effort to dismantle.

Eventually most of it succumbed to heat and/or brute force and the resultant components that were reusable were cleaned up and given a coat of red oxide for protection.

Sunday’s main event was the riveting of the palm stays to the boiler barrel which was accomplished without any hiccups with the rivet gun working perfectly after its recent stripdown, clean and overhaul.  This makes a change from spending more time getting the gun to work than doing the actual riveting job.

This coming Saturday is our AGM when we shall be sharing some interesting news.