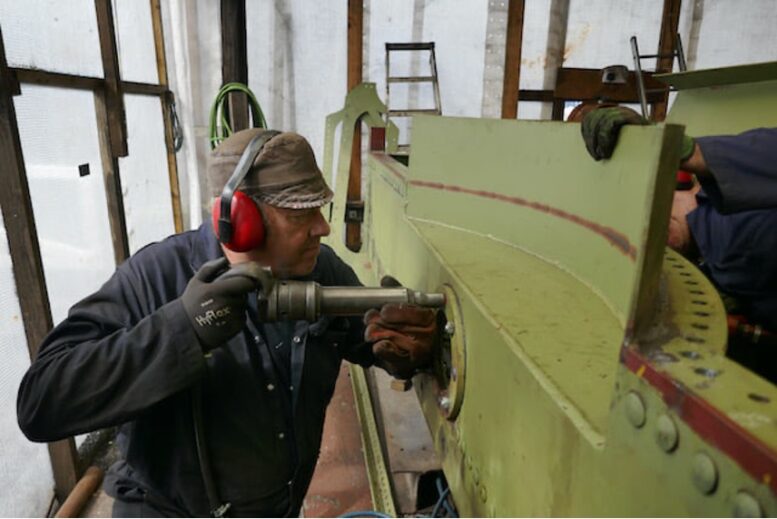 One loco off the to-do list this week as 6619’s boiler is now fully revealed and awaiting the boiler inspector’s visit.  During Tuesday and Friday, 5668’s tank had the top panels bolted into place and reamed as necessary.

oiling them and then stacking them onto the long pallet that we’ve made to transport them.

Work on the tubes continued on Sunday with the main difference being that, instead of keeping the sun off us, the gazebo was now keeping the torrential rain off.

In addition, the rear splasher on 5668’s tank was fully welded into place.

On Tuesday we stripped and stored a few more parts from 6619 and started to prepare for the job of annealing the ends of 4253’s boiler fire tubes prior to shipping them up to Liverpool.  This involved making a platform to take the oven, two trestles to support the tubes, an extended, reinforced pallet to transport them on and a clever cradle with rollers to make turning the tubes in the oven easier.

On Friday, the tube annealing continued,

6619 had the last of its cladding straps and insulation removed,

and 5668’s tank had a few more brackets made in preparation for riveting on the top panel.

For Sunday it was back to riveting and we attached the lower back panels to the floor angle.

Once that was completed, the rearmost angle to support the upper platework was riveted on, the baffles bolted into place and the rear splasher tack welded into position.

Also the first of the new tank filler assemblies was completed during the week.

Once again, work on three days with Tuesday being split between reaming many holes in 5668’s tank platework ready for the next round of riveting and continuing with the stripping of 6619 to enable a full inspection of the boiler.  This mainly involved removing the cladding (or what was left of it in some areas)

and then stripping away all the insulation material held behind chicken wire.

The latter job continued into Friday and included removing the steel framework that holds the insulation in place.  This was going to be quite useful to us as it would provide a pattern for the construction of a similar one for use on 4253.  Sadly, much of it fell apart when moved so some effort will be required tack welding it back together again.

Sunday was spent by starting work on the above jigsaw puzzle and more riveting up of the 5668 water tank.  Almost all the rivets put in this week involved some difficulty and contortions to hold them in place due to the confined spaces and involved quite a few people simply handing the hot rivet from hand to hand.

They were however all successfully put in place and the tank was then manoeuvred upright again (no easy task as it’s heavier each time we move it) and the front splasher was then welded into place and the rear one positioned and tacked in.

More panels will be bolted on next week ready for further riveting.

Tuesday’s work was removing the tanks from 6619 and, as is usual for any Rolvenden lifting job, it had to be accompanied by rain.  After removing the joining strap and a couple of bolts, the fireman’s side tank came off with no issues.

However, when it came to the driver’s side one, it wouldn’t lift at the cab end and, after clearing some more muck away and a close inspection, we found two more welds that shouldn’t have been there.  Once they had been cut through the tank lifted cleanly.

They have both been placed on concrete sleepers in the field pending stripping down to retrieve the salvageable parts.  While this was going on, others were cleaning up, labelling and storing other parts that had been taken off 6619 or continuing work on 5668’s tank.  On Friday, 6619’s bunker underwent the final preparatory work to lift it off and it was taken down and placed with the tanks on Saturday morning.

The pressure relief valves for 4253 are now both finished and the components of each have been stamped up to ensure they can’t get mixed up.

On Sunday, the flange on the bottom of 5668’s tank that takes the clack delivery pipe up through the water space was riveted into place.  This will allow us to get the tank upright again and fit the rear panels.

More parts were removed from 6619 including the reverser, drain cock mechanism, odd bits of pipework and the sandboxes and associated linkages.