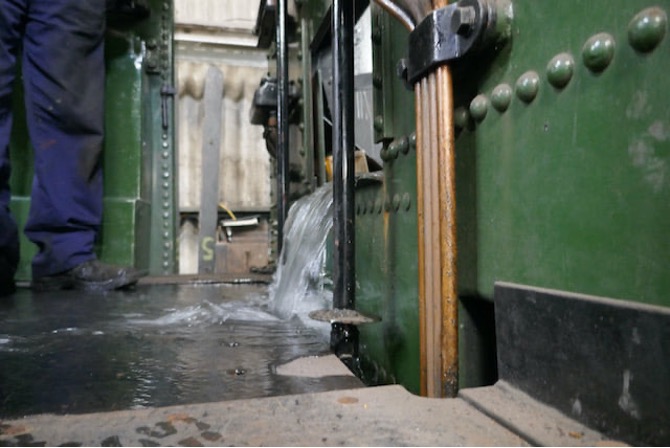 Another full week working on 4253, 5668 and 6619.  Tuesday saw 4253 moved from road 2 to road 1 in the shed which is the first time she’s moved with all the inside motion connected up and, thankfully, there were no issues.  Work continues on the machining of the pressure relief valves.

Meanwhile others were grinding and assembling more of 5668’s driver’s side tank and work to remove the tanks from 6619 was progressed with more piping removed and the cab roof prepared for removal.  This proved far more difficult than expected as many parts that should just butt together had been welded necessitating a lot of slitting with cutting discs to separate them.  Eventually this was completed and one of Friday’s jobs was to lift it off.

On Sunday, half the team were working on 5668’s tank with a good amount of welding accomplished followed by grinding and fettling

prior to alignment and bolting in of one of the rear panels ready for reaming the rivet holes through next week.

The other half were working on 6619 with the clacks and safety valves unit being removed,

the cladding sheets and insulation taken off the backhead,

the cab floor taken up, the bunker holding down bolts all removed and the bunker jacked slightly to ensure everything was free.  It’s hoped we can get the bunker and tanks lifted off next week.

4253’s boiler is progressing at HBSS with more drilling of the side wrappers and some of the patch screws and rivets fitted into a side wrapper to backhead join.

Tuesday’s work involved lifting the reverser panel onto 5668’s tank which, as the steel on this is literally twice as thick as any other panel, was not an easy task requiring many bodies and a pallet truck.  Once positioned it required the joints to be coated in mastic, bolted together and then reamed ready for riveting.

After that the front floor section and angle received the same attention with the splashers given weld preps.  On Friday, the team descended on 6619 and started removing parts as we’ve been requested to help out by removing the tanks to enable an inspection of the boiler to gauge the amount of work it requires.  This involved removing all the pipework running along the underside of the tanks.

plus the balance pipes

after which the cab roof will need to come off.  On Sunday it was back to riveting 5668’s tank with the front floor section done first as that was the easy bit with everything accessible.  After that we moved onto the reverser panel where room to hold up the rivets was much tighter.  This required some holding up tools to be specially made and also involved some physical contortions to get them in place.

Additionally, the machining of various bushes etc was continuing in the machine shop.

The week started with turning 5668’s water tank onto its side which involved the hoist, a lot of people and a lot of care.

This was so the tank could be riveted to the base plate and involved positioning the joining angle and then drilling, reaming and bolting it all together which occupied the majority of Tuesday.

On Friday, 4353’s tanks were filled with water to cleck the operation of the float controlling the gauge reading and also for any remaining leaks.  All was going quite well until a waterfall suddenly gushed from the bunker’s coal door.

Appears that the bolting down of the two inspection covers on the top of the bunker’s water space had been overlooked!

On Sunday we riveted the outer tank to base join although, given the high temperature, we had to undertake this in very short sessions as, even with a big extractor fan running. the interior quickly became almost unbearable.

As all these rivets are countersunk, the heads had to be ground flush afterwards so we had a team slowly moving from one end to the other following the riveters.

Once completed the tank was then turned over into its other side and another half dozen rivets installed to fix the rear end panel to the base.

plus a start made on drilling the stay holes in the side wrappers.

This coming Monday (14th June) will be the tenth anniversary of 4253’s arrival at Rolvenden with this final shot showing what it looked like on that day.

A lot has been done since that time.

During the week. more cleaning and checking of 4253’s motion and underpinnings was carried out, the machining of the rod bushes continued as did the fabrication of the new tank filler necks and lids.  Also, in the hope that we can get out and about to a few fundraising events shortly, the sales trailer had a bit of a spruce up and some minor repairs.

On Sunday it was back to the riveting on 5668’s tank and, given the temperature, the job of forge master wasn’t one to be envied.

However, it wasn’t long before the whole building was sweltering as were the people in it.

Even working outside in the direct sun was cooler so others were cutting out some sheet metal for replacement panels on the rear of the trailer.

At HBSS, the boiler work is also continuing with both side wrappers now fully welded into place.