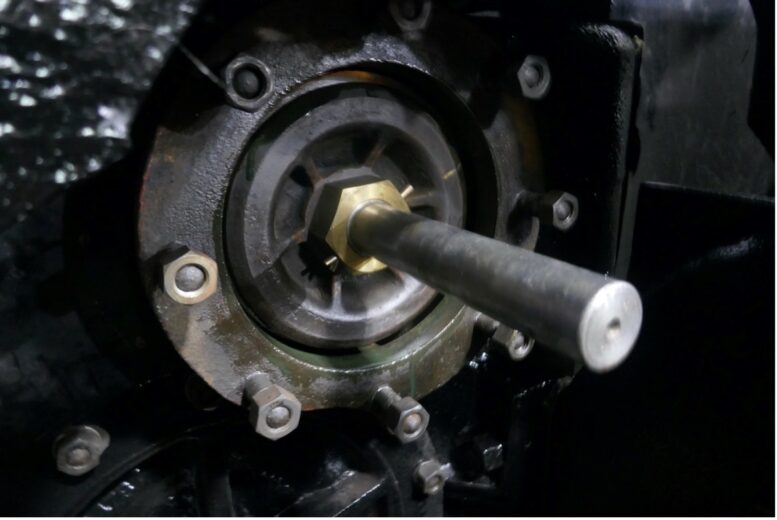 A lot of work has gone into the front running plate this week with the pony truck cover’s holding ring receiving it’s final fettling before fitting properly, further adjustment of the pipes from the oil box and the reaming out of the fixing holes.

It has taken many hours of labour to get all these components fitting happily together.  On 5668’s water tank, the final rear panel was bolted into position for the last time and had all the rivet holes reamed through while the last run of rivets installed in the other panel were painted by our new, youngest volunteer, Jake.

For the connecting rods for 4253, polishing out of the machining marks continued,

the new oil pot tops were milled to the correct height

before being trial fitted.

At Automation Technologies, the first of the bronze cases for the new steel spherical bearings was machined out on their CNC lathe and fitted perfectly.

At HBSS, the boiler has now had all the backhead mounting pads fully welded.

Finally, some of the team attended the Wrotham Steam and Classic Car Show on Sunday with the sales stand to do some fundraising to reduce our current shortfall.  Please visit the How You Can Help page to see how you can assist us in closing that funding gap and thereby keeping the current rate of progress going to finish the project.

which was then marked out on a piece of plate

and then cut out with the plasma cutter.

until it would fit comfortably on the running plate and not foul the pipes to the oil pot.

The new connecting rod came back finished from Automation Technologies Ltd so we now, for the first time, have a full set of rods for the loco and both connecting rods are seen here having the machining marks  polished out.

On Sunday, the connecting rod big end oil pot holes were drilled and tapped and the oil restrictors fitted, three of the four rod oil pot tops were fettled to fit (one can be seen in the above shot) with the remaining one needing to be machined down to fit.  All the tops also had a thread tapped into them to accept the corks.  The rear panel was taken down again from 5668’s water tank so the top and bottom sections of the joining plate could be welded on and dressed.

4253’s boiler has now had all the backhead fittings pads made and tacked into place as seen below.  The small tubes have been placed over some of the new stays to protect the threads.

With the new rods finished, the only major item now to be completed is the boiler as most remaining components are already held.

However, at present, we are £31k short of the funds needed to complete the loco so, if you enjoy reading of our progress week by week and don’t want to see it dramatically slowed, please help us to get the job done.

Go to the How You Can Help section where you can become a shareholder, purchase some of our merchandise, sponsor a component or simply make a donation.  Thank you.

During the week, the final painting of the front running plate sections was completed and then many hours were spent trial fitting the main centre section and then taking it off again for fettling to ensure the oil pipes for lubricating the pony truck were not being trapped.

The front covers for the piston valves were painted, trimmings made and fitted to the oil boxes and, as the caps will be difficult to see once everything is reassembled, we’ve painted them yellow to stick out.

and the first one fitted to the intermediate rod after drilling and tapping the hole in the oil pot.

On Sunday, the front rear panel of 5668’s water tank was riveted on as were the remaining baffle plates

and the valve gland packing covers were machined to take the new brasses.

and the big end.

and all the sections of the front running plates that were taken down last week were painted.

We also put some new plants in the tubs next to the Dave Dee memorial bench.

On Sunday, the valves were fitted which ended up taking all morning by the time the bores and valves had been coated with oil

and then manoeuvred into position before being pushed through until both ends were sitting in the bore.

After that, the brasses were fettled and pressed into the covers

before the rear ones were lifted into position, passed over the valve rod end and bolted up.  This was followed by the front covers and, finally, the end caps.

After lunch it was back to 5668’s water tank where the front rear panel was riveted to the bottom angle.

Work on the boiler this week included positioning the mounting pads for the backhead fittings.  The white areas in the following shot are where the pads for the water gauge will be placed.