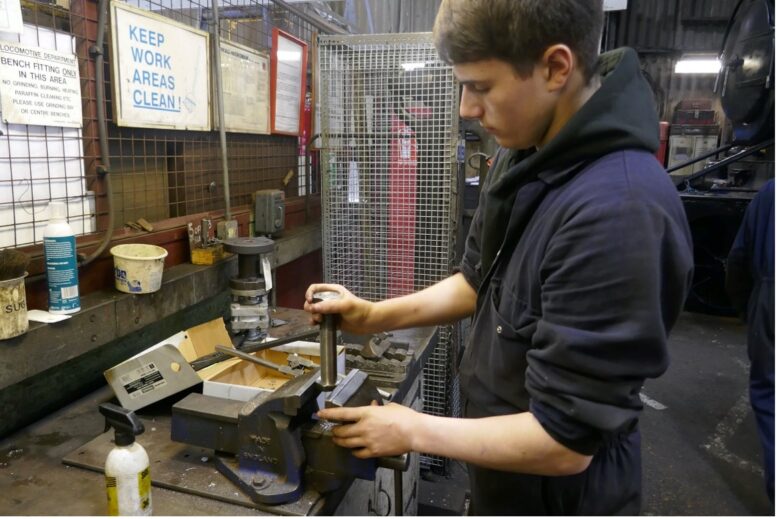 Main activity this week has been mocking up the damper door operating rods for 4253’s ashpan.  The original levers had the ends cut off and new ones welded on so that we had round holes to attach to the bell cranks rather than the worn, oval ones.  The rod brackets made last week were riveted to the damper doors,

jigs were made up so we could mount the bell cranks

and the guide plate for the levers

so we could make the connecting rods to the right length and test the operation of the doors.

A visit was made to the foundry to deliver the patterns to have the new big and little end bushes cast and another to the firm machining our rods to see that work in action.

The remaining crank pin nuts were machined to size and a start made on machining the flats on them.

Meanwhile, the boiler has been turned on its side at HBSS to give access for replacing the crown stays and also to put in some rivets that were inaccessible when it was upside down.

All good news other than the fact we will soon be presented with some large bills so please go to the Get Involved button to see how you can help us finish the job as quickly as possible.

More work carried out this week removing parts from 4253 for when the boiler returns, including the balance pipes and elbows between bunker and tanks.  The bracket that ties the tanks together across the backhead was painted and fixing plates made to hold it in position.  Also, the new rods were moved to another local company mid-week who can start the final machining almost immediately.  Sunday was a busy day with the new blast pipe having its internal bore machined out to the correct size

and various tasks carried out to progress the ashpan damper door linkages.  The new holding bracket for the bell cranks underwent some more fettling to finish,

After which it was a case of working out exactly where in the floor it needed positioning.

The damper doors themselves were measured and marked out for where the operating rod brackets need to be attached after which they were drilled and countersunk ready for riveting.

leaving just the flats to be done and the drilling for the pin.

Meanwhile, at HBSS the tooling of the new copper stays is underway as the following two shots show.

Remember, you can still help get the boiler finished earlier by sponsoring some of the remaining stays – just follow the Stay With Us button on the Home page.

This week we started the partial strip down of 4253 in preparation for fitting the boiler on its return.  The smokebox to saddle bolts were all removed, cleaned up, number stamped to ensure they return to their original positions and then oiled and the majority of the tank retaining bolts were removed.   From the cab, the windows were taken out to avoid the possibly of damage, the sliding doors taken down and the condensing coil removed.

The ashpan has had the damper doors fitted

and work progressed on making the operating rods and cranks for the doors plus marking out the plate through which the rods pass.

The new water jet cut blanks for the coupling screw rods arrived and one is seen here next to an original.

so they could be placed between centres on the lathe and the initial machining done prior to screw cutting the threads.

This week, many of the original angle pieces for 5668’s bunker were cleaned up, assessed and then painted

The remaining sections of smokebox handrails for 4253 were taken out of storage together with the sockets that attach the rail to the tanks, cleaned up and positioned so the holes could be drilled in the tanks for the attachment bolts.

The machining of new special bolts and nuts for the brake gear was finished,

the parts fitted and then drilled/reamed to accept a taper pin.

The new support plate for the damper bell cranks was marked and drilled and then fitted along with new bushes for the bell cranks themselves.

Most of Sunday was spent moving 4253 backwards and forwards so that we could mark where the new crankpin nuts need drilling to match the existing holes in the crankpins to take the gradient pins.

This involved setting a plumb wire at the centreline of the wheel and then, with the crankpin at 6 o’clock, marking where the wire met the centre line of the nut.  More laborious but necessary work.