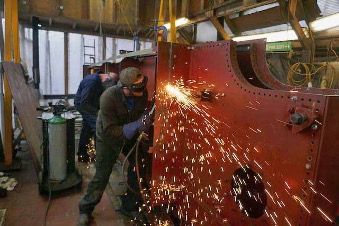 plus more painting of 5668’s fireman’s side tank components.

Sunday saw us back riveting on 5668’s river’s side tank with the outer panels being attached to the top and bottom angles.

At HBSS, the boiler work has been progressing with the backhead drilled ready for staying.

On Tuesday, it was tank work with various bits coated in mastic and bolted up ready for the next round of riveting.

Plus the rivets fitted last week were cleaned up and painted as were some of the angle pieces for the fireman’s side tank.

On Friday the newly made tank water gauge was fitted and tested by manually lifting the float.  The pipe for the drain for overflow spill from the tank filler was cut and trial fitted to its flanges.  Sunday was odd job day with locking nuts and pins fitted to the brake shaft caps,

making and fitting joining brackets to the tank angles and fitting the driver’s side water balance pipe after making a new gasket.

Also, the tank’s drain pipe was positioned and the flanges tack welded on.

Tuesday’s work consisted mainly of preparing 5668’s driver’s side tank for some more riveting with the  outer side panels bolted back on together with all the angle sections on which the baffle plates are mounted.  As this was the final time they were being bolted up, all the joins were coated with mastic first.

And work continued on machining the brasses for the side rods.

On Friday, the 5668 tank filler lids were progressed with the retaining lever arrangement being made,

4253’s water level gauge had the new indicator finished off and the casting repainted while some electrical repairs were carried out following the annual PAT testing of kit. Additionally,  the rear draw hook was fitted and the final parts of internal motion that fit to the rocking shaft were connected.

On Sunday, the baffle angles were riveted to the outer panels

together with the angle that joins the front end to the rear panel.  The side panel to floor angle holes were all reamed through and a few more parts bolted up for further riveting.  At the end of the day it was looking like this.

During the week, 5668’s driver’s side tank was dismantled leaving just the bottom angle attached to the floor section.  This was in preparation for the first riveting session scheduled for the weekend.

On 4253, the front drawhook has been fitted fully which involved cutting a large round load spreading washer from 1” thick plate to sit behind the nut.

This is seen in the next shot (painted green) together with the rubber shock absorbing discs.

The machining of the second rocking shaft cap was completed and fitted and the new pointer for the water tank contents gauge was finished.  On Sunday, we started riveting 5668’s tank beginning with the bottom angle to floor joint.

By day’s end well over 100 rivets had been inserted with this shot showing the job part way through the process which has the parts assembled , one bolt – two holes – one bolt,   The rivets are then fitted to all the holes, the bolts removed and rivets then placed in those holes.

Next week the outer panels will be bolted to the angle now riveted to the floor in readiness for next weekend’s session of riveting.

Meanwhile, at HBSS, the boiler is getting ready to have the firebox side wrappers fitted

Week One (and end of April)

First job this week was on Monday to collect the new intermediate rod from SCISS water jet cutting and deliver it to Inca Geometric for final machining.  On Tuesday, the rear panels were taken down from 5668’s driver’s side tank so that the baffle angle brackets could be fully welded on and the lower shelf they sit on trimmed back to match using the plasma cutter.

and the top sections were removed for red oxide to be applied.  On 4253, the fireman’s side rocking shaft was removed so that the link that connects it to the valve cross head could be fitted.  This required a degree of fettling with the job continuing on Friday.  Also this week, some more progress was made on the tank filler lids.

On Sunday, the final trial fitting and trimming was done on the water tank prior to it all being stripped down for de-burring next week.  This involved some final ‘adjustments’ to the rear of the back panel involving heat and a large hammer.

cutting away the surplus material on the end panel

and final dressing of all the cut edges.

Meanwhile in the shed, the rocking shaft was being refitted and one of the bearing caps bolted down.

The rear draw hook was removed so its mounting plate and rubbers can be properly assembled (it was only a temporary fit) and a start was made on checking every nut, split pin and fitting on the frames from front to back.