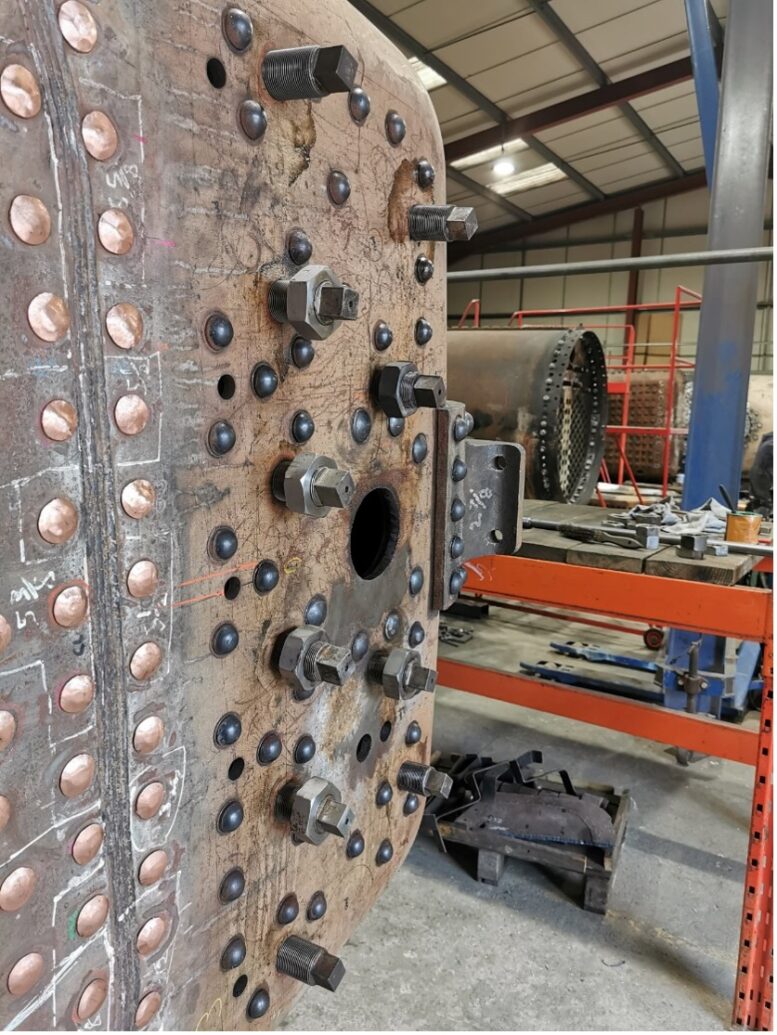 This week, the front rear panel for 5668’s tank was painted, bolted on and reamed ready for riveting

and a start made on refurbishing the maker’s name plate from the turntable at Robertsbridge.

and, as the fixing nut for the front one can only be accessed from above, the front centre section of the running plate had to be removed.

On Sunday, the final fettling of the couplings was undertaken to ensure they could freely move after which they were fitted to the loco with this shot showing the front one going in

and this one showing the rear one in place.

After that, the front area under the running plate was rubbed down and repainted as some surface rust was appearing after its extended period spent out in the open.

We also undertook the job of cleaning up and polishing as best we could the newly cast maker’s name plates for Terrier ‘Poplar’ as these are needed for early next week.

On the outsourcing front, 4253’s con rod is nearing completion of the machining with this shot showing the flute being cut in the side.

At HBSS, the boiler has had the crown stay holes drilled in the repair patch and all the other stay holes reamed ready to take the new stays.

This week started with Monday’s memorial train for Mark Yonge, a long-time supporter of the Railway and a director of 4253 before failing health forced his resignation.

Most of Tuesday’s effort was directed at helping the shed staff prepare Terrier 32670 for its repaint following overhaul due to the extremely tight deadline for completion.  There were so many people working on different sections of it that some nifty choreography was required to avoid getting in each other’s way.

Even so, there wasn’t room for everyone so work continued on polishing 4253’s side rods and bolting parts together on 5668’s water tank ready for riveting on Sunday.  Friday saw 4253’s old screw couplings removed and dismantled so the new screw rods made by RH&D Railway could be fitted and 5668’s filler neck bolted to the top panel and the holes reamed.  On Sunday, part of the team set to with riveting down the above filler neck, some more of the edge beading, the front baffle

and finally, the lifting eyes.

Others were working on assembling the screw couplings with the first issue being that the split pin holes in the new trunnion blocks were found to have been drilled too close together.  This involved countersinking the holes, cutting lengths of round bar that were pressed into the holes, plug welding them in place, grinding back and then drilling new holes in the right place.  We had had these blocks made some time ago and had never had cause to offer up the couplings so the error had not been spotted.  It was then a case of fettling the new couplings to ensure a good fit

and then assembling them by heating the coupling’s bend so it could be closed around the trunnion block,

before being clamped into position and left to cool and settle.  However, because of the extra work caused by redrilling the holes, we only got one of the four finished by day’s end.

The new conrod is currently having the deep flutes milled into the sides with one side now finished and the following shots show the start and finish and also the amount of material removed as seen by the levels of swarf.

Boiler work this week has included a start being made on fitting the mounting pads to the backhead onto which the steam fittings will be bolted.

Over Tuesday and Friday, 5668’s water tank was prepared for some more riveting with the back panels trimmed to accommodate the joining strip after it’s been bent to shape.

The front back panel was then taken down so the front top panel could be removed and mastic applied to the joining surfaces after which it was bolted back down and the holes then reamed through.

Work continued on polishing up the side rods which, although coming along, still have some way to go

and the drainpipe that takes excess water from the tank top when filling the tank was prepared ready for welding in place.

On Sunday, the pipe was welded in after which the top panel was riveted

Followed by the front capping strip as this has to be in place before we can rivet on the filler neck.

At HBSS, the boiler work has included repairing the crown stay holes where necessary and welding in the repair patch to the crown where whistle drips had caused corrosion

plus final fitment of some of the longitudinal stays.

Finally, the new connecting rod is currently being machined.

More work on 5668’s tank this week with the front end rear panel having the last of the baffle brackets welded on before being bolted back into position.

After that, the cab end panel was offered up and bolted so all the marking for the baffle bracket positions could be undertaken before it was taken down again and the brackets welded into position.  The baffles were also removed and drilled to match the bracket bolt holes.

The forward edge of the panel was trimmed back by some three inches and then it was all offered back up and everything bolted together again.  We now have a gap between the two panels which will provide access for a slim volunteer when we eventually rivet them up.  Next job is to shape the joining panel that will fit between the two main panel and be welded into place once everything is finished.

For 4253, the new blow down valve has been delivered after machining by one of our shareholder volunteers,

the old rods have had the holes for the bolts that retain the bearings enlarged and new threads cut as the originals were a very loose fit and the long job of polishing up the rods has been started.

The machining of the new connecting rod at Automation Technologies has begun so, hopefully, that final rod will be with us soon.

At HBSS, the boiler has had the last of the copper stays installed,

and the assembly of the main steam pipe has been started.

This week, on 4253, the trailing rods received some machining to return a couple of the holes to round from being slightly oval and the new intermediate rod had a recess machined and an oil hole drilled.  Also, some more measuring was undertaken in respect of the rod bearings and the final crank pin nut had the flats machined into it.

On the 5668 water tank, the rear panels that were marked out last week had all the rivet holes drilled

after which the front panel was offered up and bolted temporarily back into place so the baffle plate mountings could be made.

This involved marking the previously made plates for fitment,

and then cutting them to size.

After that, they were bolted back in to the angles on the outer panel, the inner mounting brackets positioned so as to meet the inner panel whereupon they were clamped to the plate and then the whole assembly was removed and holes drilled thought the plate and bracket to enable them to be bolted together.

A time consuming process but it ensures that everything will fit and bolt together properly on final assembly.

At HBSS, the boiler work continues with the palm stays riveted in and the longitudinal stays now positioned.

Finally, our fundraising team attended our first event of the year at the St. Mildred’s Church Model Railway Exhibition in Tenterden.