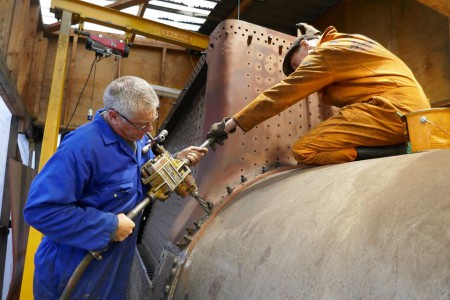 Despite working on five days this week we haven’t actually done anything on the loco.  Reason is that this is our busiest fundraising period with ten days of manning our sales stand during the running of the Santa Specials.  Tuesday involved gathering together all the stuff we were going to need, Thursday was transporting and erecting the gazebo at Tenterden Station with Friday spent fitting out and installing and checking the electrics.  There was a bit of time left over that day so a start was made on making a towing connection so that our sales trailer can be moved around the field by the JCB loading shovel.

Saturday and Sunday were spent manning the stall with Saturday being a day set aside for special needs children so was a bit quieter.  Sunday however was manic with everyone kept busy for the nine hours we were there.  The following shots show the duty team on Sunday, a typical queue at the Tombola and one of the day’s prize winners.  Certainly looks as if it’s got his Christmas off to a good start.

We expect normal servive on the loco to be resumed next week.

This week we continued with the cleaning and painting of various bits from the 108 DMMU to speed its return to traffic and they are now all finished and ready to go back.

Friday, Saturday and Sunday was the Tenterden Christmas Market so some of the team set up our sales and information stand on Friday morning and manned it throughout the weekend.  Our coded welder arrived on Friday to weld in the sides of the new throat plate with this shot showing the beginning of the root run

and this the subsequent testing of the weld.

With that done we could crack on with the fixing of the throat plate to the barrel so, on Sunday, we started by reaming out some of the rivet holes, countersinking the ones where the palm stays would sit over them and then bolting them up tight.

After that, the remaining holes had their bolts removed and were then in turn reamed out.

We are now ready to rivet the throat plate and then move on to the palm stays.  Finally, here’s a shot of the Christmas Market showing how busy it was.

On Tuesday the cutting out of the new backhead cladding was started,

the main boiler steam pipe was descaled and inspected and

the front of the firebox was also descaled.

On Friday, the brake brackets from the class 108 DMMU were delivered as we had agreed to scrap off years of accumulated crud and then clean and paint them to help progress the refurb.  A start was also made on machining the new brasses for the side rods.

On Sunday, the DMMU brackets received more paint and a small area of the boiler was heated and dressed to align it with the new throat plate prior to welding in next week.

More of the backhead cladding was cut out including a 17″ diameter hole for which we made a simple jig of a steel strip bolted to the centre point with a hole at the other end to hold and guide the plasma cutter nozzle.

This week we’ve had a visit from Somers Forge to look at and check dimensions of the two rods we need – we know that someone out there has rods lying around, if you know who they are, please let us know.  The finished tool boxes have been bubble wrapped and placed into storage together with the new bits of cylinder cladding that aren’t needed yet.  The firehole door mechanism was taken out of storage and stripped down after some effort so that cleaning up, assessment and overhaul can be undertaken.  We also laid out the rusted pieces of backhead cladding we have to give us a pattern

after which a start was made on marking out and cutting the new pieces.

The needle gunning of the inside of the boiler barrel has finally been fini1shed to everyone’s relief given the amount of noise and effort involved.

There has been much other work on the boiler with the foundation ring bolted to the old backhead,

It is now ready for the specialist welder to join the sides before we rivet it to the barrel and then fit the palm stays.

Once that’s done it can safely be moved for further work to be undertaken.

A lot of effort has been expended this week on needle gunning the inside of the boiler barrel to remove all the old scale which is uncomfortable, unpleasant, tiring and very noisy work so involved a number of people taking turns to spread out the misery.

Alongside this job various pieces of tooling were being made and trial fitted to hold up the remaining firebox lap seam rivets on the top corners.  Also, the new tool boxes were receiving a final fettling to remove welding blemishes etc. ready for top coating.  The main steam pipe was laid out to measure up for new bolts

and the longitudinal stays were given a coat of paint.  On Sunday the tool boxes received their first top coat and are looking quite smart.

The riveting team spent all day putting in the last of the firebox lap seam rivets which numbered less than ten but were extremely difficult to hold up with each of the corner ones needing different blocks, wedges etc. to be constructed so we could get the hydraulic jack 1to both fit in the gap and sit square on the rivet head.

The final rivet was supposed to be the easy one – replacing one on the side where access was easy but the pneumatic holding up gun refused to work properly (as did the spare) so it took almost an hour to strip it down, clean all the components, reassemble it and make it work.  The actual rivet replacement took barely 30 seconds.

Next week isn’t likely to be much quieter as we now need to caulk in all those firebox seams.