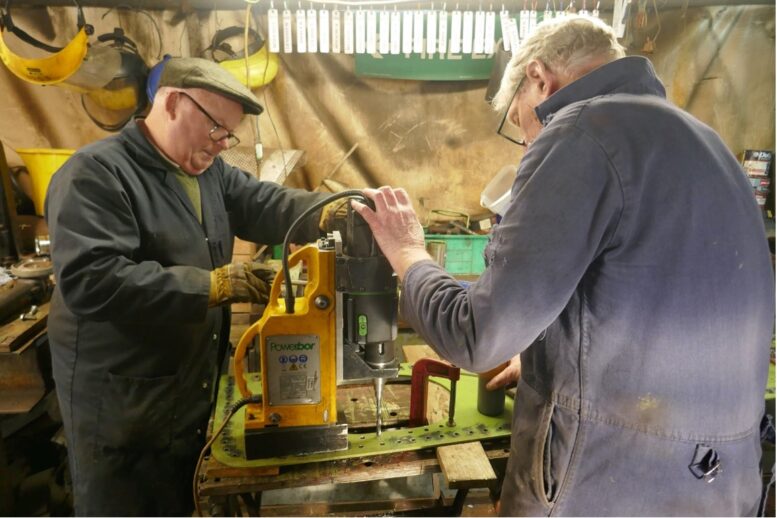 Tuesday saw most of the team spending the day drilling holes in the tank top panels plus drilling and tapping the stud holes for the side inspection plate.

All the baffle angle pieces were bolted into place for the final time and all the holes reamed ready for riveting.  The Railway’s apprentice, George, started machining some bolts for 4253’s brake gear as a training project for his college work.

plus repairs to the station trolley.

On Sunday, the remaining outer, bottom angle rivets were installed

and the large holes were marked and drilled to attach the tank’s front and rear lifting eyes.

After that, the top panels and rear cab section were removed to give us access to start riveting the outer top angle into place.

plus the vertical baffle support angles.

That will probably be the last of the riveting until after Christmas as the December weekends will be spent fundraising at the Santa Specials.

This week saw work continuing on the snagging of 4253’s frames with nuts checked for tightness, split pins cut to length and fitted etc.  Another job started was to undertake a quick external rebuild and repaint in bright yellow of the mobile light tower for use in the car park at Tenterden during the Santa Specials.

On the 5668 water tank front, the new top panels had fixing holes drilled all along the edges

which, given the number involved, took many hours.  Once finished they were lifted into place and bolted to the angle sections which enabled us to position, mark and weld on the top brackets for the baffles.  Once done, it was all taken apart again to enable us to the rivet the bottom angle to the outer side panels.

Some 130 rivets later we had this.

Meanwhile, at HBSS in Liverpool, 4253’s boiler is having the stay holes all sized.

This week’s work has concentrated on 5668’s second tank with all the outer panel to angle holes reamed out ready for riveting,

the rear corner section and top angle bolted on.  The water gauge mechanism mounting plate was drilled and trial fitted

and the bunco booth sheeting was replaced in a number of places where it had holed.  The baffle plates were offered up and trimmed as necessary

before having the fixing holes marked and drilled.

The top panels were also temporally fitted so that measurements could be taken for ordering the rear panels.

After endless hole drilling the week finished with the tank looking like this.

Next week the top will have to come off again for yet more drilling.

On Tuesday, the remaining panels for 5668’s tank arrived from the profile cutters and were immediately given an undercoating.

Carrying on from last Sunday’s work, the doubling plate for the handbrake column mounting was bolted to the side panel, the stud holes in the plate for the balance pipe were drilled and tapped ready for riveting on and more angle pieces were coated in mastic and bolted up.  Meg came down and started to sign write the ‘4253’ on the rear buffer beam and it’s already looking good even before the final coat is applied.

Another delivery was the casting for the blow down valve which will now go for machining.

before we started on the cab section of the tank where the handbrake column plate was riveted on followed by all the angle pieces being mastic coated, bolted up and then riveted.  A total of 200+ rivets achieved for the day.

and all the bottom fixing angles for the baffles were cut and drilled.