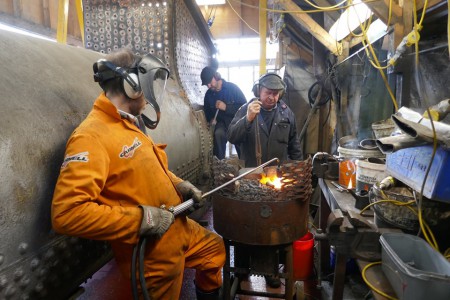 followed by some floor painting.  The boiler expansion brackets were needle gunned to get the rust out of the hollows on the back that accommodate the boiler’s stay heads after which they were given a coat of heat resistant paint.

In preparation for Sunday’s riveting the mobile forge was set up and all necessary air hoses, guns etc. were laid out and tested.  On the day we were therefore able to get an early start on the remaining lap seam rivets on the top front of the firebox.  This is not an easy area to get holding-up tools into as it is restricted as to access and, as the curvature of the firebox doesn’t equal that of the boiler, the distances and angles are seldom the same from one rivet to the next.  This had required a number of small blocks of different thicknesses to be cut, drilled and tapped so they could be bolted singly or in combination to a small Enerpac jack to hold up the rivets on the sides while those along the top were done using a pneumatic holding-up tool on various sized blocks.  This also necessitated a trial run with a cold rivet every time to gauge the thickness of block(s) required.  However, apart from that, the job went reasonably quickly with the rivets heated,

passed down into the boiler,

where they were inserted into the hole,

and the holding-up tool pumped to force them into position

whereupon they were then hammered down with the rivet gun from inside the firebox.

By day’s end we just had the corner ones to do and, given these are the most difficult to hold up, special tooling will have to be made up next week before we can complete the job.  Once finished we can then fit the throatplate and palm stays.

This week started with digging out some of the floor in the entrance to the construction booth so we can change it from steps to a ramp which will make life easier for getting heavy items in and out.

The shuttering is all in place and the concrete gets poured next week.  Also, as part of last week’s clear up of the boiler house, we ended up with a bucket full of odd nuts and bolts that had been lying around and these have all been sorted into sizes and put back in stock.  The cab tool boxes are nearing completion with the lid holding arrangement for the larger box finished and undercoated

and the catch for the smaller one having been made and welded on.

This shot shows the larger getting its final undercoat while the smaller is being worked on in the background.  It also shows our new tool storage racks which are already proving their worth in time saved finding the right spanner etc.

The boiler expansion brackets were taken out of storage to be cleaned up and inspected and it took almost as long to find them as it did to do the job.  They were of course in the furthest, darkest corner buried under everything else.

The refurbishment of the sheet guillotine machine has been c1ompleted including painting and it just needs reassembly now.

We have acquired an old plate guillotine which, this week, was stripped down, assessed and all the old paint stripped off.

It appears to be in quite good nick and, after re-tapping some threads and freeing off other parts, the components were given a coat of red oxide.  The axle for the 08 diesel received its final coat of gloss and now awaits refitting.  Tool box work continues with the front lips of the lids receiving some more weld on the join and then being ground back to give a smooth finish.

A rod and catch mechanism to hold the lid open has been made for one box and welded in place and the second one started.  The first of the new crank pin nuts has had the groove for the Belleville washer machined into it

and, later in the week, the guillotine parts received a coat of gloss

as did the inside of the tool boxes.

We have also had a good clear out of the boiler house which has been slowly filling up, with many items mysteriously appearing unannounced!  This has provided sufficient room for the portable forge to be moved in in preparation for replacing the remaining firebox lap seam rivets.

One of our side jobs this week was painting the axle that’s currently out of the 350 diesel shunter but, given how wet the weather’s turned, we first erected one of our gazebos over it.

Back at 4253, the fire grate carriers were cleaned up and assessed,

he last of the vacuum retaining valve pipework union and hose tails was machined up and the side rod crank pin nuts have been measured prior to the next machining operation.  Most of this week’s work has been directed at the cab tool boxes with closing lips cut and welded to the bottom edge of the lids, the hinges being radiused and countersunk before being bolted on,

and the boxes drilled to accept both hasps and the padlock rings.

Additionally, the tank and bunker water space access plates have had rubber gaskets cut to fit.