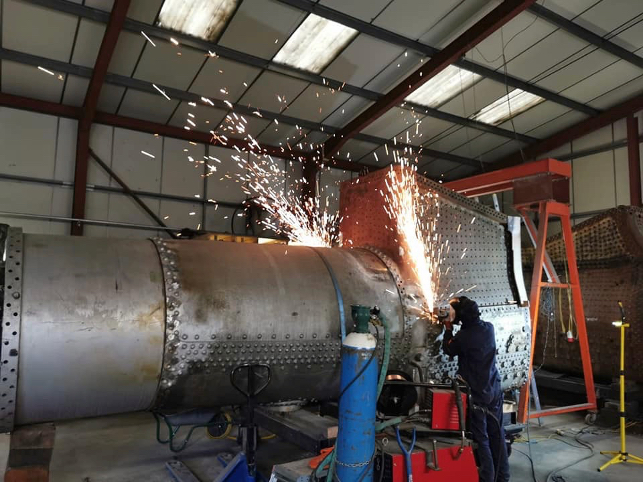 The camping coach emergency exit steps are nearing completion with the main framework all welded up and painted and new steps cut and welded on.

This project has also given us the opportunity to provide a bit of welding training to one of our younger volunteers as well.

The staff transport overhaul moved forward with the steering re-bushed and sorted, the rusty bodywork rubbed down and paint applied – colour?  GWR green of course.

The valve gear display is also just about finished and is certainly a work of art.

On the loco front, the slipper blocks for 4253 were having the white metal machined elsewhere as the mill at Rolvenden isn’t big enough to take them.  This shot shows them set up side by side with the one on the right yet to be started.

5668’s driver’s side tank floor had all the bottom angle attachment holes reamered in preparation for the first riveting session.

The week started with more improvements to the bunko booth – new flooring slabs laid, a drop door made for the tap and die cupboard, the last of the scrap metal rammed into the skip before it was collected and a general tidy-up of the outside area.  Alongside this work, the dismantling of the fire escape steps for the camping coach continued and this shot shows much of that activity and also our stock of flue and fire tubes at bottom right for making clocks and egg timers.

The steps are badly corroded requiring most of the fixing bolts to be drilled out and the threads re-tapped while the main leg box sections were cut away.

The replacement sections have been ordered in, given a coat of primer except for the join areas

and then welded into place.

The latter part of the week saw 5668’s tank floor sections welded together.

Followed by the bottom angles sections having high temperature mastic applied before being bolted to the floor ready for riveting.

The next sections of platework for 5668’s tanks will arrive shortly and, to enable those to be under the hoist so we can easily move them, the tank base sections had to be turned completely around together with all the associated parts.

Not sure the word should be spoken before October is over but here goes.  With Christmas on the horizon clock production has started once again with tubes being cut to make the bodies which are then de-rusted and generally cleaned up.

A length of round bar has been cut up to make the legs and the next job will be to weld them on.

The repairs to the bunko booth have been finished and further maintenance and improvement work undertaken.  A cupboard has been built to hold the taps and dies stock, paving slabs laid to take our refurbished guillotine and bending machine, a new ignition switch fitted to the staff on-site transport

and a general move about so we can get the ashpan back inside for the final jobs.  As one ‘help out’ job is coming to an end, with the valve gear display for display at Tenterden Station having had brass brackets made to fix the Perspex screen that will keep small fingers out of the moving parts, another arrives.  This is refurbishing the emergency fire escape steps for the camping coach which, as this shot shows, has suffered a bit from corrosion.

Finally, here are a couple of shots of the boiler at HBSS having the side wrappers trial fitted and fettled.

The valve gear display for Tenterden Station is coming down the home straight with just a few more parts to be reassembled – this is how it looks presently.

The 5668 tank panels have seen as lot of moving about to get at different areas.  The holes for the cab side runners have been drilled and the studs for the side sheets have been finished, threaded and trial fitted.  The last of the holes for the tank sides were also drilled in the bottom angles.

The boiler’s blower pipe and brake ejector pipe are off to Liverpool so, together with the crossheads that are going elsewhere for final machining, they were loaded onto Nobby’s trailer.

In preparation for the crossheads return, a dummy alignment tool has been machined.

Other work during the week has been on general maintenance.  Our sales trailer has suffered a bit from weathering so we’ve moved it under a gazebo next to the bunko booth where it can receive the necessary attention to replace posters and damaged paint etc.

Some of the roof sheets on the booth itself are now less than watertight so the affected areas were stripped off and replaced together with some of the side sheets in preparation for winter.

The big tarp covering 4253 was becoming more hole and rips than fabric so that too has been replaced and the larger remnants of the old one recycled to provide a cover for Marcia’s boiler now it’s back on site again.

The usual three days this week despite the wet weather.  We did manage to fill a scrap skip on the only dry day having collected all the cut up, unusable parts of 5668’s tanks and bunker together with all the other bits that have accumulated over the last few months.

and the edge of one of the side panels was thinned down where it will meet the adjacent panel.

Meanwhile, further sections of the original tank baffle brackets have been cleaned up prior to painting.

The valve gear model for display at Tenterden is coming along with a final gloss coat applied to the base and the wooden surround having been stained.

Reassembly of all the working valve components has now started.

Other work has been the fitting of a cowl to the forge flue followed by firing it up to check it works OK (which it does) and some cleaning up and modifications on our stoves in preparation for the colder weather around the corner.  The new vacuum pump operating bracket has been trial fitted to the crosshead as we now have the new attachment bolts.