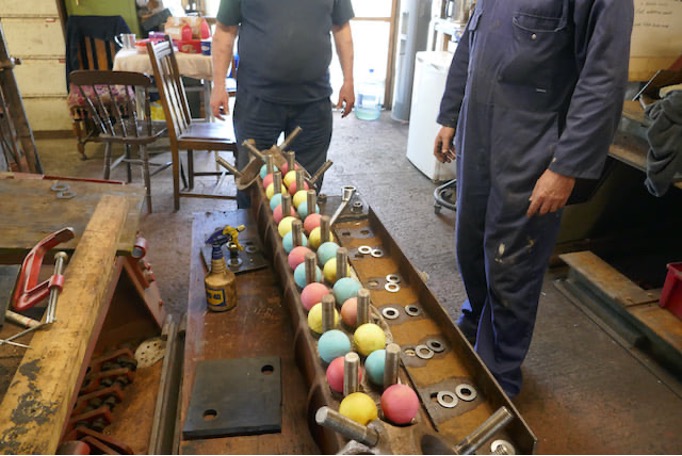 The date for the unveiling of the Dave Dee Memorial Bench has now been set for Sunday 10th October at Rolvenden, 1.30pm for 2pm and all are welcome.

On Tuesday, all the weld preps were done on the rear panels of 5668’s tank and then it was off to Wittersham Road to remove the couplings from 5668 which involved a fair amount of heat and violence.

Once off, they were taken back to Rolvenden and subjected to more of the same until they were successfully dismantled after which there were cleaned up and assessed.

On Friday, Rob and Andy from HBSS came down to look at a couple of boilers for K&ESR so we took the opportunity to talk over the next stages of work on 4253’s boiler.  Meanwhile, others were making blanking plates for our boilers eventual hydraulic test

plus working out the number and sizes of all the studs that will be required while others were working on the machining of the bearings for 4253’s rods.

On Sunday, the edge trim was riveted onto 5668’s water tank

after which the last of the baffles were bolted into place and then the rear panels were welded in.

We hope to have this tank finished and moved outside next week whereupon work will start on the one for the fireman’s side.

Most of this week’s work was on 5668’s water tank with the top beading bolted in place ready for riveting, the top plate prepped for welding on of the filler neck and the rear panels bolted on and reamed.  The lower edges were then tack welded to hold them in position when the top edges are riveted up.

while they were knocked down from the outside.

This shot shows the two panels in place prior to being riveted.  The gap in the centre is to enable access for the riveting and a final closing panel will be welded in once that’s completed.

On the 4253 front, more work was done on the chills for white metalling the rod bearings, the boiler mud hole doors were cleaned up and inspected

and the blast pipe got the same treatment.

On Tuesday and Friday the team continued with making/cleaning clock bodies to re-plenish our sales stock.

Building a new cupboard to hold drawers for all our engineering drawings and removing the Dave Dee memorial bench from storage to check it over pending the unveiling which is to announced shortly.  This has sadly been delayed for over 12 months due to Covid restrictions.  Also, 5668’s tank baffle panels were bolted into place ready for riveting and 4253’s blast pipe components were taken out of storage for cleaning.

On Sunday, the lifting eyes and baffle plates were riveting onto 5668’s tank which involved quite a few people

and some uncomfortably positions due to the restricted space to access some rivets.

Another task was to connect up the main brake shaft and side plates to the brake cylinder which took far longer than expected due to one of the nuts/studs joining the top and bottom of the cylinder together fouling one of the water valves as it tilted during operation.

An extra day this week as we took our sales stand and tombola to the Bexhill 100 Classic Car Show on Bank Holiday Monday to keep the fundraising going.  One of the first jobs on Tuesday was to start making more boiler flue tube clocks given the number we’ve sold over the last couple of events we’ve attended.  The regulator box refurbishment continued with the valve slide being cleaned up.

To progress the hydraulic testing of the superheater header, a large angle plate was marked and drilled to fit over the superheater element head studs and clamp 28 rubber balls into the small steam holes.

On Friday, the balls were all positioned as shown below with the clamping plate to the right.

The plate was bolted down and the four large steam pipe holes had ½” thick rubber coated with mastic placed over them and a thick steel plate bolted on top.  Two of the plates had couplings in their centres to provide an inlet for the water and an air bleed.  This shot shows the balls well and truly squashed into place and two of the large holes still to be covered.

The header was then filled with water and pressurised using a pump to check there were no cracks or leaks in the casting.  Thankfully, it passed the test.

and then returned to 4253’s driver’s side tank to remove, apply mastic and replace the bolts attaching the reverser quadrant as a couple of these had been weeping water.

The boiler at HBSS had had all the rivets / patch screws fitted to attach the side wrappers to the backhead and throatplate and the stay holes are now being reamed.